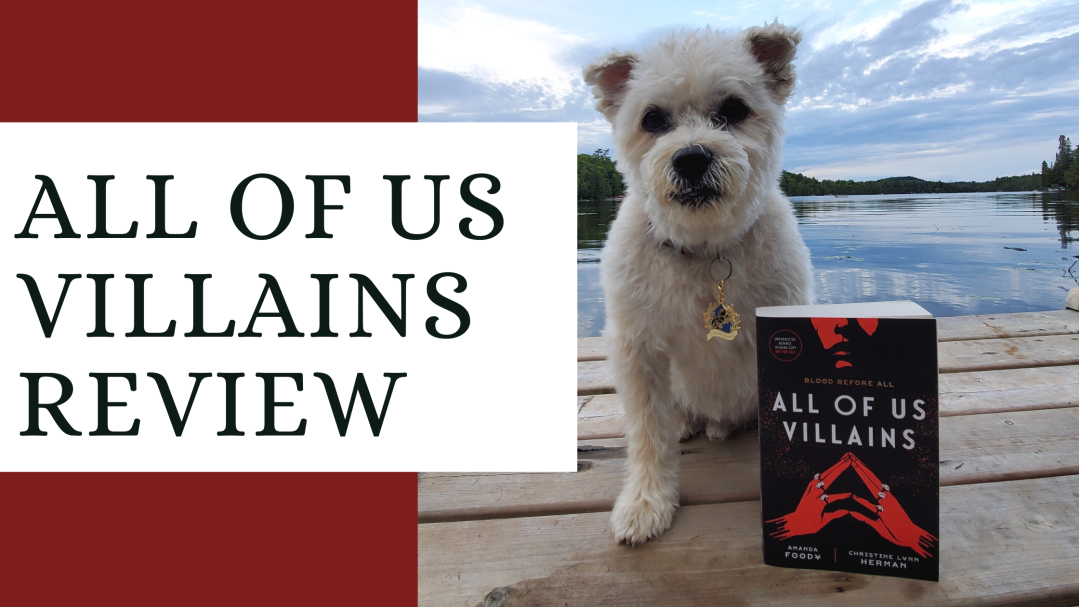 All of Us Villains

Ever come across a book that you didn’t expect to like, but wound up being completely hooked to the story? That was All of Us Villains by Amanda Foody and Christine Lynn Herman for me. I got the opportunity to read this when I started my mini vacation earlier this month thanks to Raincoast Books and I am so so so happy this ARC landed in my TBR!

When the Blood Moon rises over the small town of Ilvernath, seven families put forward a champion who will compete for the opportunity for exclusive control of high magick. The catch? Only the last living champion is declared the winner. This time, the once secretive competition is now under international scrutiny thanks to a recently released tell-all book exposing the town’s curse and its participating families.

The competition in All of Us Villains is similar to The Hunger Games, but with magick and way more violence. While I started off a little confused and slightly bored at the beginning as everything was being set up (I’m not sure why past-me was so confused about the magick system at first, but alas), once the competition began, I was completely absorbed in the story.

The story is told through the POV of four teens whose families are linked to Ilvernath’s curse. Some of the POVs are characters who are favoured to win and better prepared, while others have families that expect them to lose. It leads to a lot of different perspectives that kept the story very interesting.

There are many twists in this book, some of which I expected, others that took me by complete surprise. There were a few times where I’ve had to put this book down because I couldn’t believe what had just happened. For those that don’t like cliffhangers, this does end on a slight one (which was nowhere near as bad as, say, Aurora Burning’s cliffhanger). I can’t wait to read the sequel, and also to get my hands on the gorgeous Goldsboro edition of All of Us Villains!

All of US Villains comes out on November 9, 2021. You can preorder it from your local bookseller.

My name is Isabel and I live in Ottawa, Canada with my little dog, Thor. I love reading, doing yoga and trying new foods. I used to work as a writer before switching to an amazing comms job with a not-for-profit organization. I read often as a child, but stopped when I was in high school. It wasn’t until last May when I stumbled upon some really amazing Throne of Glass fanart on Pinterest that my love for books resurfaced. I went out the next day to buy a Kobo (and all of the books in the ToG series) and haven’t stopped reading since! View all posts by Isabel

One of my most anticipated books just came in the mail today! It's so hard not to drop what im doing to start reading House of Sky and Breath! 🤩
Happy Valentine's Day from Thor and I! What is something that made you smile recently?
Hello friends! I've been gone again but now that things are starting to go back to normal, I wanted to give a small update and hopefully start posting and chatting books with you guys regularly again!
Happy Sunday everyone! It's been a while and Thor and I have missed posting here. Between work, Christmas prep, and managing my plants and Thor, I had decided to take a little break from bookstagram. Thor is doing ok! He's starting to show his age more and I'm noticing small things here and there like he struggles sometimes to hop up onto the bed or the couch or even do stairs, so we're taking things easy for him and helping him out where we can.
THE FUZZIEST LITTLE KING! 👑 @bookshelvesandbunnies tagged me over the summer to do the #bookstapetthrone challenge and I finally built Thor a little throne! I think I'll need to try it again later and make it even bigger. Thoughts?
Happy Friday! Anyone doing anything fun this weekend?
#TGIF! What are your plans for the weekend? I'm starting a new book tonight and hopefully attempting to make my first stained glass piece!
What's a book that you didn't expect to like, but wound up loving? For me that was All Of Us Villains by Amanda Foody and Christine Lynn Herman. Told from four POVs, All Of Us Villains follows competitors in a small town's deadly competition for high magick and power. Think Hunger Games but with magic and more violence. A full review can be found on my blog if you're interested (link in bio). Thank you so much to @raincoastbooks for sending me an ARC! 💕
HAPPY HALLOWEEN! I'm still trying to decode what Thor will dress as tonight, but for now, he is Yoda. Who else is dressing up? 🎃